The Ontario Liberal Party (OLP) regularly engages its thousands of active members across the province on policy development. Traditionally, the party has reached out to its membership using in-person or online meetings and written submissions. But when the COVID 19 pandemic hit in 2020 and face-to-face gatherings were no longer possible, the OLP needed a new way to engage its members online. They chose Ethelo because they wanted a digital platform that would be equitable, accessible and capable of sparking conversations that would capture people’s attention. Ethelo’s real-time feedback capability kept conversations flowing and helped the OLP team discover new ideas. They continue to use the final report data to help make decisions long after the engagement concluded.

With thousands of active members across the province, gathering the Ontario Liberal Party’s (OLP) membership for policy development discussions is no small task.

The OLP traditionally brought its members together through a combination of in-person meetings and a written submission process.

But when the COVID 19 pandemic hit in 2020, the face-to-face gatherings that the party traditionally relied on were no longer an option. The OLP needed to find a new way to engage its members online as it developed its 2022 election platform.

“It was incredibly important to the leader and the party administration to engage our members across the province in a really grassroots way,” the OLP shared. “It’s an important aspect for any political party to give its members a seat at the table when you’re having conversations about public policy development.”

Because of the variety of experiences people were having during the pandemic and different levels of comfort with digital technology amongst the membership, it was essential to the OLP that their online engagement process was as equitable and accessible as possible.

They also wanted a process that would let members engage in theme-based policy discussions that would capture people’s attention and spark conversations instead of a more open-ended ideation approach.

“It was about putting some high-level, mission-oriented statements in front of people and being able to capture their feedback based on everything that’s been going on in the past year and a half in their lives,” the OLP explained.

Real-time feedback from thousands of members

The OLP team chose Ethelo as the best platform for engaging its membership in online policy discussions.

“The Ethelo technology served as a platform to be able to have these conversations and get a report with data at the end that told us what people said and thought.” they shared.

They were also happy with Ethelo’s real-time feedback capability and the ability to see what did or didn’t get support.

“We got some great real-time feedback about some of the big issues people are concerned about, like long-term care, education, and managing a global pandemic.”

Ethelo also created space for people who might not otherwise be heard to share ideas and have those opinions considered by other party members.

And with more than 6,000 participants engaging in English and French, the OLP says their membership loved the platform.

“Some of the folks that work on the campaign team are pollsters, so they have a better sense of uptake and participation rates. They’re all satisfied with the level of engagement we got across the party membership.” 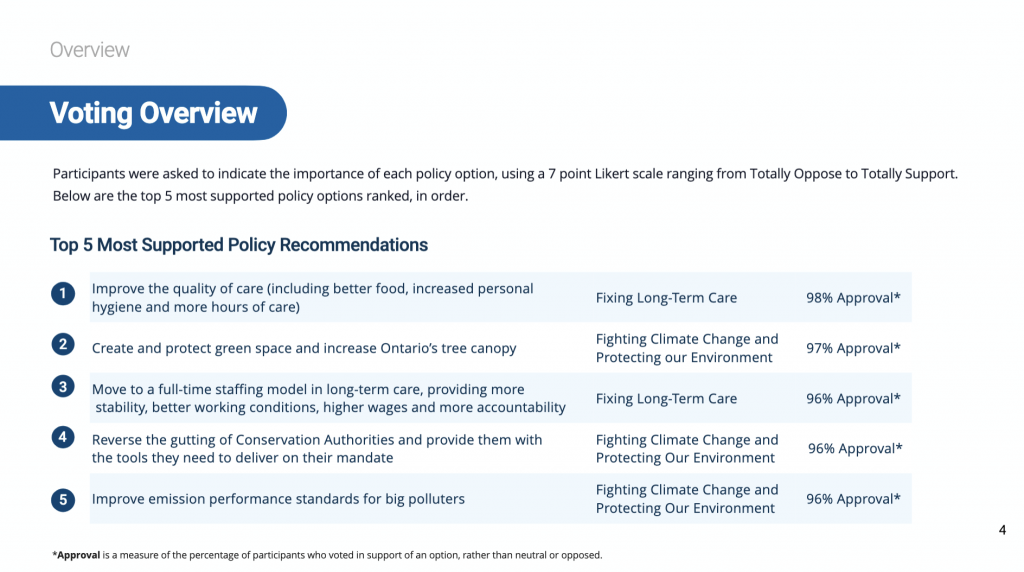 One of the most significant benefits for the OLP from their Ethelo engagement was showing members that their ideas and opinions were being heard in the process.

“It’s important for people, whether in a political context or any kind of civil engagement process just to be heard,” they said. “Everybody is looking for a place to send their ideas and register their opinions.”

Two equally important parts of the engagement process are following up and acting on what you hear. Both of which the OLP is doing as well.

They’re hosting a series of sessions about what they heard from party members, which are open to anyone who wants to participate. And they’re using the data from their Ethelo report regularly to prepare presentations to share with the membership.

“Ethelo was easy to use, accessible, and it gave us great feedback and data. It’s nice to have a centralized document with everything included to be able to go back and reference.”