Bridging the distance to take action on climate

When Rebecca Garlick was hired on as a Climate Change Coordinator for the seven municipalities that make up Perth County, ON, she wondered how she would meaningfully engage the members of her distributed rural community, especially during COVID-19. Luckily, Ethelo provided a “lifeline to the community”, helping Perth County create a climate action plan that was fair, effective, and broadly supported by residents across the area. 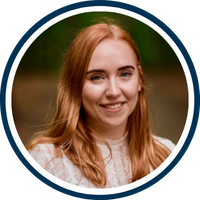 When Rebecca Garlick was hired on as a Climate Change Coordinator for the seven municipalities that make up Perth County, ON, she wondered how she would meaningfully engage the members of her rural community.

Garlick was tasked with gathering data and opinions that could help inform future climate action plans for Perth County. However, the geographic distance between the communities has historically made it difficult to reach out to residents. When COVID hit, this became even more difficult.

“It was a huge challenge to bring everyone together,” Garlick recalls. “Prior to lockdown, I would always try to meet groups and have in-person conversations. So I was trying to find a way that I could still do public consultations and gather the data I would need to get council buy-in on a climate plan.”

Garlick discovered Ethelo after watching an eDemocracy Webinar that came through her inbox. “I remember thinking, ‘Okay, this sounds like a really great, democratic solution for this strange time that we’re in.”

The rest is history. Ethelo partnered with Garlick to create a climate action plan that was fair, effective, and broadly supported by residents across the area, which could then be tailored by city staff to the unique needs of the seven communities within Perth County.

“We needed to hear from a broad spectrum of citizens across the municipalities, because the opinions and directions would be different in each one,” she said. “So it was useful to create a broad plan that showcased which actions would be supported by the majority of the population.” 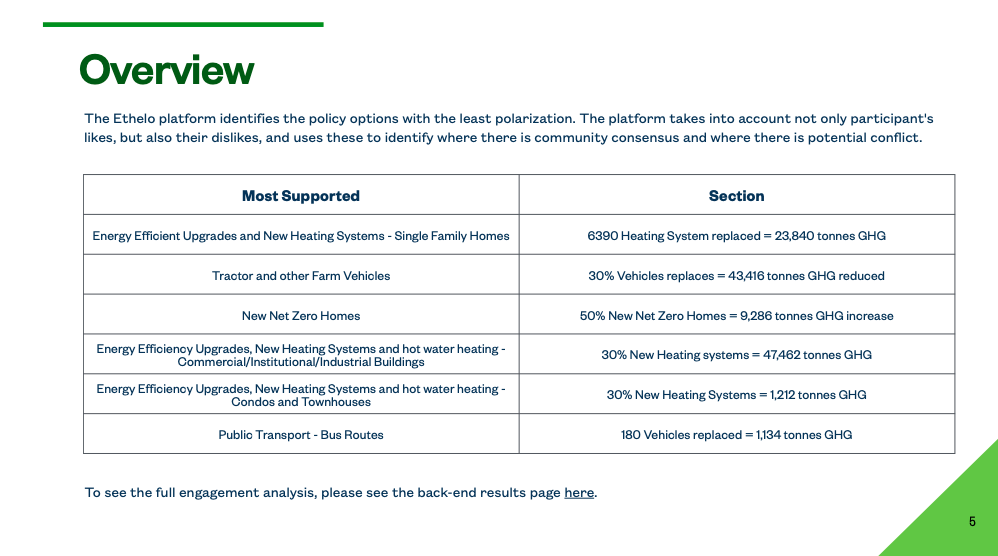 Participants were invited to vote on different actions that the municipalities could take to reduce greenhouse gas emissions, such as upgrading buildings to be more energy efficient or starting a residential green waste program. The Ethelo platform used a sliding scale to let them decide how much they thought a particular action should be prioritized over others.

In order for participants to ‘submit’ their individual plan, they had to reach an emissions reduction target of at least 10%, ensuring that the results would have a meaningful impact if they were put into action. In the end, the set of options that were identified as the most broadly supported by participants have the potential to reduce 247,720 tonnes of greenhouse gas emissions in Perth County.  Almost 950 residents took part.

As it turns out, there weren’t many surprises in the results. Garlick says the process was valuable because it affirmed what she had already suspected residents wanted local government to focus on, such as the impact of buildings. It was also an educational opportunity to show residents where GHGs in their communities came from.

“A lot of people liked how easy it was to respond to the survey, and how visual it was,” she adds. “They liked how at the end they could see where they stood compared to the rest of the community. People like gamification. That’s definitely a strong feature of the tool”.

The Perth County city councils are still in the process of deliberating on the climate action plan, but Garlick says that the Ethelo engagement report was a big boon to council presentations. “I worked with a big management team of CAOs who don’t necessarily have time to read through the data of a big survey, so having the quick condensed version was very helpful.”

What’s more, the virtual nature of Ethelo meant that Perth County heard from a broader range of residents – especially farmers, who have a particular stake in climate action. Between harvesting season and planting season, Garlick notes that it’s tough for the agricultural community to find time to participate in community engagements. So, “being able to come in from the field and quickly answer some questions on a survey instead is so much easier than having to drive into town.”

However, not everyone has high speed access to the Internet in rural areas. As part of Ethelo’s add-on Outreach Services, the communications team produced a paper version of the survey that could be distributed to anyone who needed it, including the local Mennonite community.

“Having the Ethelo team as a resource to create these physical copies and send them to a local printing company on my behalf was incredibly valuable to me,” she says, referring to the small ways that the team went above and beyond to make the engagement process smoother. “They were a resource and a sounding board. Their help made a big difference for me during a time when I really couldn’t meaningfully engage with anybody in person.”

Employed under a two-year contract, Garlick only had a limited time to carry out such a large and complex climate action planning process, but Ethelo ensured that it was a success. “Ethelo was my lifeline to the community in a time of isolation,” she says. “It was a way for me to have a connection to as many community members as possible.”